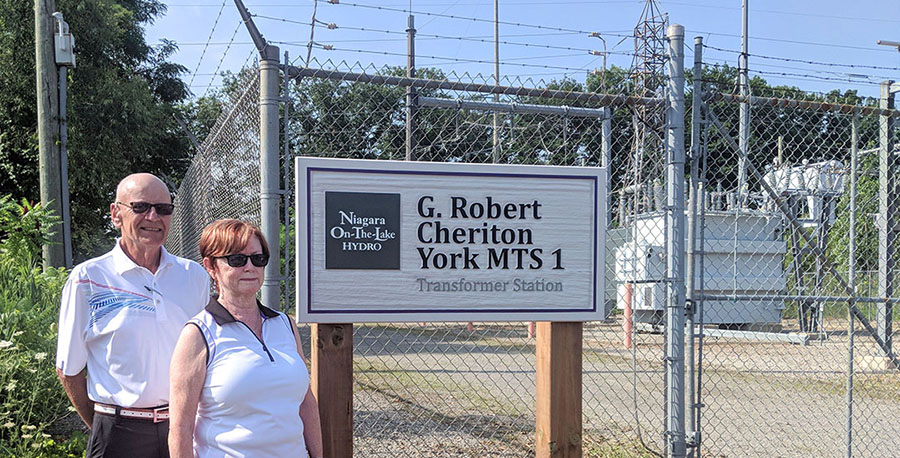 “Bob has played an instrumental role in guiding NOTL Hydro in its development over the past 16 years.” said NOTL Hydro President Tim Curtis. “This name change recognizes the leadership, ethics and common sense that Bob has contributed.”

Bob Cheriton first became a Board member of Niagara-on-the-Lake Energy, the parent company to NOTL Hydro, on February 1, 2002. It was a turbulent time in Ontario’s electricity sector and at NOTL Hydro.

Bob also served on the Board of Niagara Regional Broadband Network Ltd. (NRBN) until 2017. NOTL Energy owns 25 % of NRBN, which was established in 2004 and has become Niagara’s leader in premium high-speed fiber connectivity.

Bob is also a prominent member of the NOTL community; organizing the annual Christmas parade for many years, being a long-standing a member of the Niagara-on-the-Lake Golf Club and assisting at a number of community events.

In future years, the G Robert Cheriton York MTS 1 transformer station will undergo significant updates including the addition of a battery storage facility and the upgrade of the transformer to one that will have the capacity to supply the entire town of NOTL with safe and reliable electricity for another years to come.

« How much would it cost Luke Skywalker to power his lightsaber in Ontario?